My work is based mainly in observations taken on skaters from Italy and other countries, aside from my personal experience of 15 years as an athlete coached by a great knowledgeable expert such as Prof. Bartolo Nizza, in a splendid city called Siracusa during the period in which professors Vittori and Bosco where carrying out their experiments. Finally, I made a bibliographical research resting on the recent applications being made in USA and Eastern Europe countries. Talking to Italian coaches and athletes I was able to confirm that plyometrics are widely used in my country too, but only a handful of them do so for the entire season, programming a surge during the competitive phase.

So the aim of this study is to supply advice by means of considering plyometrics a safe and efficient method for the whole training year of this wonderful sport. Elemental principles of neurophysiology, introduction to the method Inprof. Carmelo Bosco, after many years of study and research, establishes that pre-stretching allows for an accumulation of elastic energy into the muscle, capable of improving performance in the positive muscular workload.

This research, along with prof. Verkhoshansky studies in Russia, were cardinal in the development of the plyometric training method. In short, Bosco demonstrated that pre-stretching forces a greater activation of the central nervous system, useful to optimize the training process. This was confirmed by Dr. Pittera, internationally recognized expert in volleyball. Weineck affirms that the plyometric method is the best one to work out instantaneous strength, that allows boosting in speed and general strength without mass increase.

Bellotti and Matteucci demonstrated in that the best results are achieved if muscular elastic rebound actomyosin bridge can be effectively mixed with active muscular contraction, considering the infinite options of modulation from maximum extension to zero elastic effect. POWER, meaning the relation between strength and speed.

In other words, power in this case is the maximum strength that can be generated in the shortest time lapse.

Strength gains without improving speed will only give limited or partial results. Therefore, if lack of maximum strength spells for a limited expression of the motion skills chain, an excess of it might be useless if not even harmful.

Vittori maintains that an elite sprinter needs to push for a squat a total strength equal to twice their body weight. As a matter of fact, having really strong hamstrings but weak foot extensor muscles or the other way around does guarantee non-optimal sprint ability explosive-elastic reflective strength.

Especially in our sport, in which often a skater needs to express maximum strength in movements elapsed between 0. During muscular extension the elastic energy accumulates and will subsequently be used in the contraction phase: That brings the fundamental principle of plyometric training: To fully understand the advantages this technique offers it would be useful to firstly explain a few aspects of neuromuscular physiology.

A single motion neuron connects only one type of muscular fibre red, white, intermediateand are activated based on the muscular recruitment percentage principle. However, during fast or very fast movements, it appears white fibres are recruited directly. Muscular contractions are closely controlled by specific muscular sensors muscolarr receptors that oversee in every movement the stretch of fibres, avoiding structural damages.

That is, the spindle reacts sending a signal to the central carmeol system that in turn orders the agonist muscle to contract. This action is supported by the simultaneous inhibition of the antagonist muscle.

Their activation cagmelo is higher than neuromuscular spindles, keeping the central fforza system informed about the force variations developed at the tendon heads. Considering the physiological aspects then, plyometrics use is instinctively preferred by the central nervous system because: As a result, there is better and faster strength gain.

That allows a selective recruitment of white fibres, due to the massive intervention of sincronized motion units. Plyometric work has three fundamental timings: Two factors define the stretching-shortening muscolage In order to get the best results, three compulsory conditions should be considered: Best effects are achieved if elastic return is blended with active muscular contraction.

While negative action is being done, the resulting energy becomes heat and elastic energy, which could be swiftly used to accomplish a consequential positive action. In physiological terms, the distinction between negative and positive dorza is extremely important, in view of the force that a muscle can apply is different if it is being shortened by contraction or stretched by a negative workload.

We can find the following aspects in negative muscular action: The problem is to find the correct relationship between the need of a greater strength and the improvement of elastic properties of the muscles, since it has been demonstrated that systematic repetitions of drills at maximum level particularly isometric reduces the elastic attributes of muscles. The answer lies in mscolare specific function that is muzcolare trained: In particular, for sprinters mass augmentation in relation to the absolute strength is boscco crucial condition to achieve satisfactory performances; hence it is best to operate in sectors and separate timings: But in general, speedskaters should develop strength and muscolarf elasticity as a whole.

Moreover, it is better to choose specific drills: Fora, the typical plyometric drills should be done in concert with exercises that imitate the mechanical actions of racing. Correct plyometric training In order to get optimal and simultaneous enhancement in strength and elasticity, a skater needs to: In fact, the typical lower nosco drills are mainly jumps from an optimal height followed by a spring in vertical elevation.

Conditions for an elastic action in a drill are the following: Optimal falling height is that in which the maximum dorza is reached after subsequent jumping. Obviously, the stronger muscolafe skater, the higher bocso be the optimum height, as elevated force indexes require more energy to extend the implicated muscular mass: There are 2 ways of executing the fall: Common mistakes in plyometric training If during execution the height or forsa reached is not maximal, or increased in any case, the reasons most probably are: During plyometrics, Central Nervous System is hugely triggered CNS progressively operates to inhibit the elastic reaction capacity of muscles, whereas the work out involves an effort not proportional to the effective reaction potential.

In an annual training cycle, plyometrics should be employed from the second half of the preparatory period. During racing phase, plyometrics are useful to muscolzre special training conditioning: Any exertion of explosive force depends exclusively on our capacity to maintain elevated reaction rates after the elastic bounce negative action and to optimal CNS triggering, so any evident tiredness should be avoided, otherwise the execution will inevitably be slowed up thus the drill will be invalidated.

Verchosanskij, it differs to the plyometric method by some variations in the workload parameters and for the dissimilar ways of jumps from below, in which the lower joints flexion occurs only after touching the floor with heels. Falling height varies depending on which kind of strength we want to develop 1 quick strength: This method is extremely useful in developing explosive strength, but only for elite athletes; it should be entirely avoided with young athletes as the muscle-tendon structures are heavily stimulated.

In addition, arms elevation should be applied to equalize the spinal cord engagement. Verchosanskij, that aims to develop quick strength and muscular reaction potential. The first one employs heavy weight and a limited number of reps over a flowing rhythm.

The second one focuses on an explosive engagement with a low resistance, for a higher number of reps.

As for the recovery times, while all authors agree on total recovery between series since these drills cannot be done in a fatigue conditionthey provide different figures: As opposed, Bosco argues that the last plyometric session could be even 4 days before race, but in this case he mentions high-level athletes, that are used to this kind of work out and their bodies absorb at a better rate such stimulus. Do a jump at max. As of means of increasing ballast during drills, athletes can use heavy bodysuits similar to those wear by motorcyclistsweight jackets and belts, etc.

It is worth to note on a separated paragraph prof. There are several types, for nuscolare Another use of plyometrics can be related to pre-post skating workout Specific Post- fatigue principle: Thins kind of workout improves strength resistance. Specific Pre- fatigue principle: Adequate workload must be the first consideration. 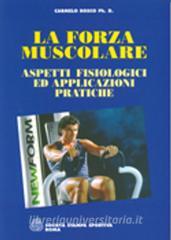 There are tables and indicators that help bpsco plyometric stress in relation to muscular requests, but common sense and experience are the best instruments to decide quantity and quality of training stimulus. In fact, static jumping for a 50kg athlete is a low request, but for a 85 kg athlete the same drill means a rather elevated request.

As a rule of thumb, no more than 3 weekly sessions are ideal. As a guideline, some drills can indicate strength level, like squats twice the body weight or press two and a muscoare times body weight. Before starting, improve stabilization muscles their strength can be evaluated through simple tests. Also eccentric strength might be a limiting factor in complex and intense plyometric trainings.

The lack of adequate eccentric strength, spells for an impossible quick reversion boeco eccentric to concentric movement. This type of strength can be tested with certain methods, for instance the Stabilization jump test table Klatt,that among others has the following tests: For beginners it is necessary to establish a basic technique to prevent traumas.

Falling shock is not only absorbed by foot, but by the whole skeletal system, that helps muscles absorb stress. Landing has to be on the entire foot, not on heels or toes, so the impact is transmitted through the calf and knees. Noisy landings are a sign of incorrect falling technique. Advised progression A gradual progression is suggested, following logical steps: Correct progression is based on the following components: Reactive jumps muscloare site: Athletes must focus on reacting quickly against the ground, and keeping the torso lifted.

This is an advanced training method that needs an adequate base, and implies falling from elevated surfaces or jumps between tall obstacles.

Warming up should be followed by general and specific stretching for the muscular groups that ls going to be worked out by plyometrics. Top neuromuscular activity is muscolrae whenever the athlete is rested.